Part of Whalehead Kid's Day is a special children's tour of Whalehead, called Jone's Way Tour. Jone's Way is named for the daughter of the Whalehead owner's valet, Mr. Starkey. "Joan" takes children on a tour of the mansion describing what life was like when she was a child there in the 1920s. At the end of the tour children will make a keepsake to take home. 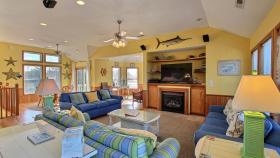